Each class at The Rosary has a dedicated saint. A saint is a person just like you and me that God gave them special graces to in order for them to do special things. All the saints were holy men and women. Some of the saints could work miracles, some could heal, some had the ability to be in two places at once. God knew these people, as He knows us, and gave them these abilities because God knew these people would do His Will.  Each class is able to take inspiration from their own class saint and talk to them in prayer.

St. Jude is the Patron Saint of Hope and impossible causes and one of Jesus’ original twelve Apostles.

He preached the Gospel with great passion, often in the most difficult circumstances. Through the power of the Holy Spirit, he made profound differences in people's lives as he offered them the Word of God. The Gospel tells us that St. Jude was a brother of St. James the Less, also one of the Apostles. They are described in the Gospel of Matthew as the "brethren" of Jesus, probably cousins. St. Jude is often confused with Judas Iscariot who betrayed Jesus.

"But you, beloved, build yourselves up in your most holy faith; pray in the Holy Spirit. Keep yourselves in the love of God and wait for the mercy of our Lord Jesus Christ that leads to eternal life."

Here Reception have created a display for St Jude asking him to prayer for them as they start their journey at the Rosary School. 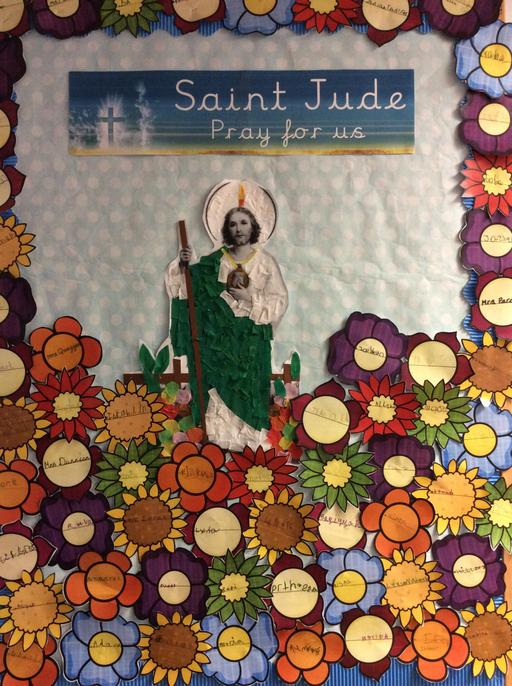 Saint Jerome, born in Dalmatia, was sent to school at Rome. He visited foreign countries, de-voted himself to the sciences and finally became a lawyer.

Jerome became a priest and joined a monastery at Bethlehem. He translated the Bible into Latin, which was to be his noblest work.

Saint Joseph was the husband of the Virgin Mary and the foster father of Jesus. Joseph was chosen by God as a trustworthy guardian and protector of Mary and Jesus. He spent his life working very hard and he wanted to provide for his family. He taught Jesus how to be a carpenter and looked after him throughout his life. 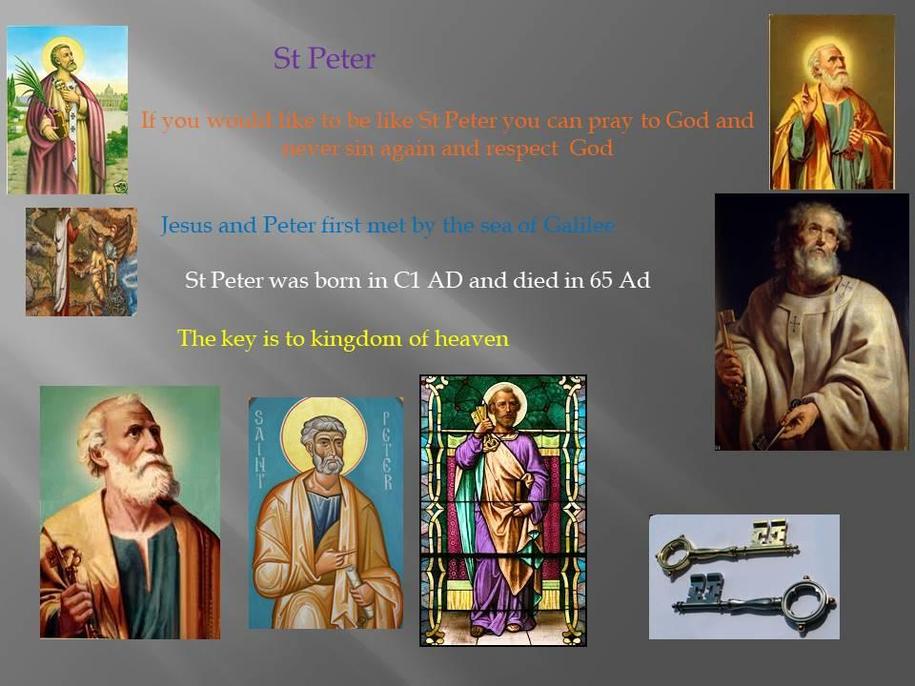 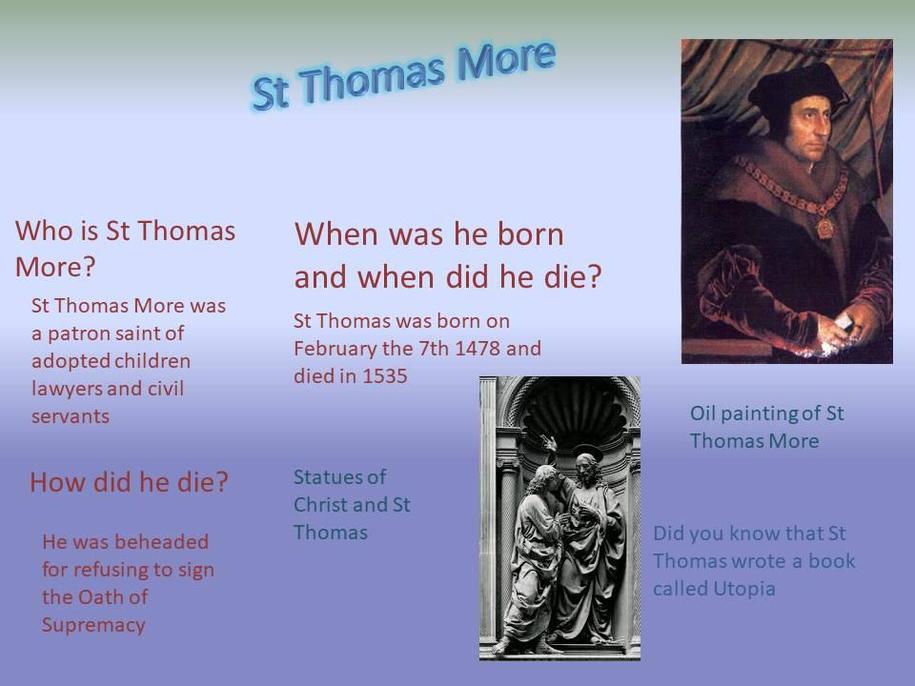 St Therese of Lisieux was born on the 2nd January (1873-1897) and was baptised two days later on the 4th January . Her original name is Marie Françoise-Thérèse Martin. is Doctor of the Catholic church, which means that her life and writings are considered particularly important for Catholics. She is also called the Little Flower of Jesus.

St Therese lived in france as a nun and her father, Louis, had a nickname for each of his daughters. Her mother, Zelie, wrote to her relatives constantly about the joys each child gave her. Therese was the baby and everyone's favourite, especially her mother's. Little Therese was blond, blue-eyed, affectionate, stubborn, and alarmingly precocious. She could throw a giant-sized tantrum. Her bubbling laughter could make a gargoyle smile.

At the age of twelve, Therese's sister Leonie felt she had no further use for her doll dressmaking kit, and stuffed a basket full of materials for making new dresses. Leonie then offered it to her six year old sister, Celine, and her two year old sister, Therese.

In October, 1881, Louis enrolled his youngest daughter (Therese) as a day boarder at Lisieux's Benedictine Abbey school of Notre-Dame du Pre. Therese hated the place and stated "the five years (1881 - 1886) I spent there were the saddest of my life." Classes bored her. She worked hard, and loved catechism, history and science, but had trouble with spelling and mathematics. Because of her overall intelligence, the good nuns advanced the eight-year-old to classes for fourteen-year-olds. She was still bored. Her keenness aroused the envy of many fellow pupils, and Therese paid dearly for her academic successes.

The ordinary games and dances of other children held little interest for her. She was uncomfortable with most children and seemed to be at ease only with her sisters and very few others. Of all the Martin girls, Pauline was closest to Therese thought of her as her second mother. Pauline was the little one's first teacher and ideal. Then one day Therese's second mother told her she was leaving to enter the convent at the Carmelite Monastery in Lisieux. Nine-year-old Therese was stunned.

Again employing the exile theme, she described her sorrow: "...I was about to lose my second mother. Ah, how can I express the anguish of my heart! In one instant I understood what life was; until then I had never seen it so sad, but it appeared to me in all its reality and I saw it was nothing but a continual suffering and separation. I shed bitter tears..."

Her feast day is 1 October in the General Roman Calendar, and 3 October in the extraordinary form of the Roman Rite. Thérèse is well-known throughout the world, with the Basilica of Lisieux being the second most popular place of pilgrimage in France after Lourdes.

Thérèse was canonised in 1925 and in 1997 she was declared a Doctor of the Church, one of only three women to be so. She is the patron saint of missionaries, Aids sufferers, florists and the sick.16 September 2009

Oh Saint Therese pick me a flower from heaven

And send it to me as a message of love

St Gerard Majella was born on (1726-1755).Interestingly he is established as “the mothers’ saint” .His feast day is on the 16th October, which is also the month of Mary. Sadly, he died of a disease called tuberculosis that spread at that time.

What is the saint well known for and why?

In 1749, he joined the Congregation of a Holy liberator, which made an order known as redemptorists which were devoted to preaching . He is also the saint of mothers and children( but mostly babies).He is known for this role because sometime in his life he had been working with mothers and  babies  and that is why he has been granted this special role.

Thank you for dedicating your life to helping mothers and babies. When you were on earth you truly fulfilled God’s message. We ask that you keep us in your prayers as prepare to leave the Rosary school and move onto pastures anew.

Unfortunately not the ones with chocolate chips.

Some cookies are necessary in order to make this website function correctly. These are set by default and whilst you can block or delete them by changing your browser settings, some functionality such as being able to log in to the website will not work if you do this. The necessary cookies set on this website are as follows:

Cookies that are not necessary to make the website work, but which enable additional functionality, can also be set. By default these cookies are disabled, but you can choose to enable them below: